Carina Jonsson is our newest Promessa Ambassador. Carina lives in Sweden and loves nature and organic things. In fact, Carina mentioned: “I have a big interest in nature and I hate pesticides because they destroy everything connected with our beautiful nature”.

Carina found out about Promessa 15 years ago. At that time she was member of the  inventors’ association called GUF in which Susanne was also a member. Susanne talked to the association about the Promession method and Carina could only think of one thing: “This is so right; it is the way to do it”. 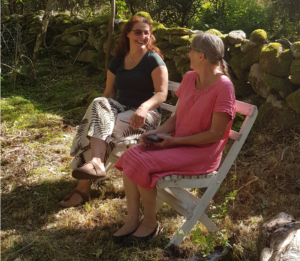 At that moment, Carina was so busy with her work, so she could not be involved with the Promessa project. However, a year ago she sent an email to Susanne. She signed up as a Friend of Promessa and Susanne mentioned to her if she wanted to get more involved and become a Promessa Ambassador. After Susanne’s question, Carina replied: “Yes, I want to”.

Carina took the Promessa Ambassador training a few weeks ago. It was a digital training that was adjusted to her schedule. In her case she took 8 sessions. She was also pleased that she received a lot of information to read and study after each session. She was happy with the training received and have the opportunity to learn more about biology and how the Promession method works.

Carina has not had time yet to think about how she is going to start playing her new role, but what is certain is that “I really want to do something” mentioned Carina.

Thank you, Carina, for caring about nature and being part of the Promessa team. We work together for a better place and sustainable solutions. Congratulations on your new title!

Do you want to be a Promessa Ambassador?

Being a Promessa Ambassador means that you feel closer to the Promessa project as we share the same values and commitment to nature. As a Promessa Ambassador you have a more active role and want to help spread the Promession method as it is all about sustainability, the living soil and the satisfaction that you are helping others to understand that there is a right choice; as our bodies can be a gift back to nature.

Being a Promessa ambassador is a key role and here at Promessa we take it very seriously. First you need to be trained in the Promession method, so you have the technical and biological knowledge. After your training you will be officially a Promessa Ambassador, so you can initiate doing activities which can help “Promessitating the world“.

Some examples of these actions could be: talking to others about the Promessa project to help increase the knowledge of Promessa in your place, maybe by organizing promotional activities, talking to friends and family, introducing Promessa in some community activities, etc. In some cases, our Promessa Ambassadors are people who are planning to open a business in this sector and want to help obtaining government and/or municipal approvals, licenses for the operation of the Promessa method in the territory, etc. In other cases, we have Promessa Ambassadors who run associations, so they want to introduce Promession to their partners/friends, local government administration, opinion leaders, etc. Always with the support of Promessa and having an open and cooperative communication process among us. Are you excited? Contact us and we will provide you with further information.